Exotic Pets: All You Need to Know about these Animals

Across the world, the number of people that have exotic pets living in and around their house is far high than we ever expected to be. It’s believed that in America, compared to zoos, American people have more exotic animals in their homes.

Do you have any Exotic animals nearby? 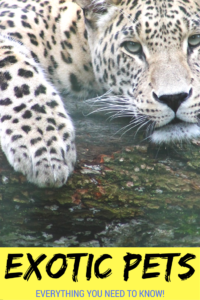 The exotic pet business is a well-paid industry, but it has drawn equal criticism from animal welfare advocates and wildlife conservationists.

Activists believe that it’s not only dangerous to bring captive-bred wildlife inside the four walls of your home, but it’s cruel for the poor speechless creatures. With so many cases pending in various courts, this issue is far from being solved.

One thing is sure:

The fascination that we have with these wildlings is a thirst far from being quenched.
Before proceeding further, it’s our job to inform you that the number of accidents taken place with these exotic pets in the picture is high too. People have not only been bitten or scratched, but they have also lost their limbs, and unfortunately, some have lost their lives as well.

So let’s get to the bottom of this.

Exotic Pets: What is so fascinating about them?

Exotic basically means something that is foreign. We as humans are attracted to stuff that’s uncommon and rare. It’s the curiosity, and it’s natural.

Remember all times we visited zoos?

All you wanted to do was go and pet that cute Panda or even maybe even play around with tiger cubs?

Also Read: 9 Cool Pets to Own!

While most of us walk away with a longing look in our eyes, some adventurous folks go ahead and live that dream. These dreams then backfire. It’s important to limit your curiosity and exercise caution in matters like these. Believe it or not, it can make a difference of life and death.

So at ‘My Exotic World’ we tell you everything you need to know about various species of exotic animals including if purchasing them is banned, if not banned what their basic requirements are, how much they cost and more importantly whether they are ‘pet-able.’

Exotic Pets: Dangerous or Not?

Exotic pets are unusual animals nurtured, raised by their masters. However, the reason that makes them ‘unusual’ plays a significant part to determine if the exotic animal in question is dangerous or not. Animals can be ‘exotic pets’ according to wikipedia. It can be because of their dwindling numbers making them hard to find and ever so rare to own.

Also Read: Why Exotic Pets are Dangerous to health!

But don’t you worry; we, of course, will guide and help you to select the best exotic pets for you to own!

There are various myths about exotic pets on the internet, and we’re here to clarify them.

Some of the other myths are:

• In the United States, do exotic pets really come from the wild?
Again, it depends on the type of animal.

• Exotic pets like tigers and bears are easy to obtain.
For starters, in most parts of the world, it is illegal to own tigers and bear let alone easy. And even if it is legal where you live, it is highly advisable you don’t make these creatures your household pets.

• Exotic animals are banned as pets for welfare issues.
It depends on the type and species of the animal you wish to own. While some exotic beauties such as cheetahs, tigers, venomous snakes, alligators, poisonous spiders, a particular breed of dogs and so on may be banned for your safety and their welfare, other animals are perfectly qualified to be owned as pets.

• Exotic pet owners contribute nothing to conservation.
There are certain species of animals that are weak and get easily preyed on in the wild. Also, some of them get highly affected by various ecological issues causing a fall in their numbers. So, to protect them from being extinct, we may have to raise them in captivity. Thus proving, this statement is too generalized.

Buying exotic pets can be expensive. Also, they can be hard to acquire depending on the animal you want as a pet.

But apart from that if you wish to buy exotic pets, these are certain things to keep in mind.

• Is the pet you want to buy legally in your province/state?
In the United States of America, animals that are legal in one state may not necessarily be legal in the other states.

• Is the pet you wish dangerous?
Owning a pet involves occasional slight scratch or gash. It can happen playfully too. So make sure these wounds don’t lead to something severe.

• Does the person from whom you wish to buy your pet have a valid license?
It is important to make sure that you buy your pets from licensed breeders so you can take action if by chance you’re fooled. Also, breeders get their license after a thorough inspection and hence are more reliable than other sources present.

• Are you going to be able to support and provide for your pet all through its life?
In their excitement, people tend to ignore that their pets need to be looked out for all their lives. While some pets have a shorter life span, others have a lifespan of even 12+ years. So plan for the long haul.

• Is the pets’ maintenance cost affordable for you?
Like mentioned before, when you buy your pet, especially exotic ones, make sure you can manage their expenses throughout their lives.

• If you buy a pair of male and female, make sure you know about their reproduction habits.
Families usually buy small animals in pairs so their beloved pets will have each other to play with. Hence, if you wish to buy a pair of opposite sexes don’t forget what Newton said: Opposites attract!

• Make sure there is a Veterinary doctor in your vicinity who’s fully qualified to take care of your pet if any he/she falls sick.
Before buying an exotic pet, please ensure there is the person who can deal with all of your pets’ sicknesses and diseases for obvious reasons.

We hope we have given you a slight glimpse into this mysterious world of exotic creatures.

To know more about them feel free to look around!

Enjoy though carefully; you never know which animal may steal your heart!

P.S: If you don’t wish to buy, don’t let that stop you from poking here and there, after all not all exotic animals are adapted to be exotic pets!