Titi Monkeys- Why are they exotic?

The monkeys are often referred to as New World primates. They are native to the South American forests. A Titi monkey can be easily spotted from its unique physique. The most common ones are brown with a long grey tail and blackface.

Dusky Titi monkeys are preys for the Crested and Ornate Hawk Eagles. Even the older species such as Brown Capuchins prey on Dusky Titi monkeys. This is the main reason why they are rarely sited atop of tree branches and stay in dense vegetation.

Their tails are mostly used for balancing rather than grasping things. The red Titi monkeys often stay in trees. They socialize with other species. However, their predominant social activity is grooming.

Red Titi monkeys sleep in dense vegetation, or leafy places with vines growing, to be hidden. A group of red Titi monkeys commonly has a nuclear family. 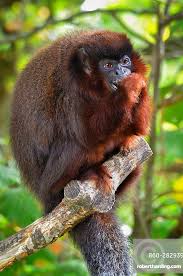 It consists of a monogamous pair and the offspring. These red Titi monkeys once paired up, stay together for life. The father takes care of the young Titi monkeys for up to 4 months. After this, the offspring stays with the family for years until it is independent.

These monkeys have a light grey forehead. A white band of fur across the crown of the head is their distinctive feature. And agouti i.e fur that has alternate light and dark shades of light brown.

Their legs, chest, and sideburns are reddish. These monkeys have a flat nose. Interestingly, these red Titi monkeys are often referred to as coppery. Because of the fur having a rusty shade to it.

On average, red Titi monkeys weigh up to 1.4 kilograms. They have strong limbs that help them move across branches. Red Titi monkeys stay in the South American rain forests. Across those of Peru, Bolivia, Brazil, and Venezuela.

They eat insects and flowers along with fruits as their staple diet. Also termed as frugivorous species.

To express their anger, they often lash their tails, bare their teeth and sway their bodies. Vocal and visual communication is also seen amongst red Titi monkeys. During fights, red Titi monkeys often trill. These are short squeaks one after the other repeated rapidly. 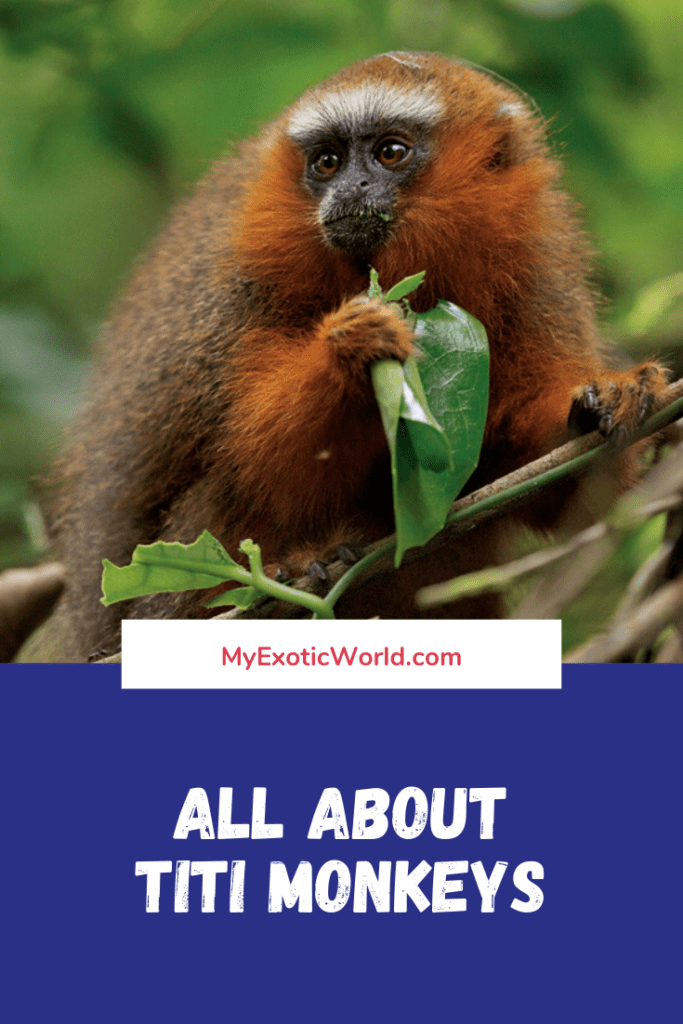 Trills are heard while they are wrestling, grooming, and when one a monkey has lost its way! The male and female red Titi monkeys often perform duets before or during sunrise. It begins with moaning and ends with honking. During rains, they make no calls. Over time, the duet gets synchronized, with easy transition between parts.

Neighbors often respond to duets- this is a way of marking one’s territory. The duet can last for 5 minutes.

Red Titi monkeys have three subspecies. The color of their foreheads is the main distinguishing feature. The three species are:

Red Titi monkeys are not at risk of extinction. This is mostly because they stay in dense forests far away from human settlements. As well as, these monkeys hardly ever roam around on land. They rest on trees and commute across the forest by jumping from tree to tree. Red Titi monkeys are prey for certain birds and cats.

Raptors and snakes, along with Capuchin monkeys are predators of Titi monkeys. Yet, Titi monkeys coexist with other species. This for their diet and the habitat. The main threat to Titi monkeys is the habitat. Titi monkey’s lives are threatened because of rapid deforestation. As well as, the unforeseen forest fires.

Want to read more about exotic monkeys? check out my post on Baby spider monkeys!