Baby Wolves: All About Diet, Names, Puppies and Pictures

Wolves are one of a fascinating species of our planet. They are smart, powerful and extremely able of looking after themselves.

Their howling, probably the most famous sound of the jungle is pretty much world-
renowned. An interesting fact about dogs and wolves is that they belonged to the same species some 34000 years ago. It was
only then that they were separated into two different species. So mainly wolves and dogs belong to the same family.

Wolves live in packs. They hunt together and live together. One will rarely ever find a wolf alone in the wild. They protect each other and cooperate with each other every step of the way.

How many babies does a wolf have at one time?

Wolf pups are born in a litter, as in, at least 4 to 6 pups are born together. As the wolves live in a pack, all the members of the pack usually help in taking care of pups. The adult wolves hunt for the pups and also watch over them when the other adults are out for hunting. The wolf pups too have their own set of quirky traits and attributes.

For instance, Wolf pups are born blind and deaf. They only develop these sense after being born as they grow up. Interestingly, they have a high sense of smell, probably to compensate for the lack of the senses of eyes and ears.

Female wolves give birth to the pups in a sheltered space like a cave. If they do not have access to a cave then the other members of the pack, likely male young adult wolves, dig a hole in the ground which has ample space for the mother and her litter. This also protects the baby wolves from other harmful animals in the forest as well as any rough weather. The gestation period of wolf pups are around 63 days. But it takes around eight months for these pups to grow completely up and accompany the other adult wolves on hunting trips.

How do wolves take care of their babies? 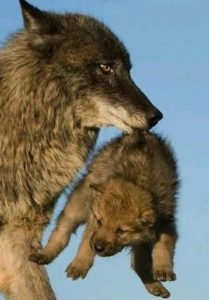 The den, or the place where the female wolf gives birth, is maintained as a clean place by the mother wolf. Because the wolf pups don’t open their eyes until almost 10 to 12 weeks after their birth, and they can’t hear either, they need to be taken care of very keenly by their mother. They cannot leave the den and that is why it is important for the mother to keep it clean and free of any infectious bacteria and germs. After the birth, the mother actually eats the placenta. One reason is to keep the den clean, and the other is that it actually acts a nutritious meal for her in a time where she is not competent enough to hunt for her own food.

What does a baby wolf eat?

The baby wolves live on the milk of their mother for at least a month before graduating to
meat which is hunted for them by the other members of their pack. They are imbibed into the routines of the pack very gradually. When they first come out of the den, they are allowed to wander here and there. After sometime, they can go to far off places but only under adult supervision. About eight months after they are born, they are considered grown up enough to accompany the other adults for hunting.

Wolf pups, even at a young age are very active. They are taught a lot of things by the adult members of the wolf pack from the very beginning. They spar and play a lot with their litter mates. Animal researchers, in fact, have actually found that the games that these pups play replicate the actions of an adult wolf. So they are basically just training for life in the wild even as kids. They even deploy toys like bones or wooden branches or other such random things and treat them as their prey. Even at a young age wolf pups hunt small animals like squirrels and rabbits as practice for when they are allowed to hunt with the adult members of their pack. As they grow older, some of the wolf puppies leave the pack and find a mate of their own, and then maybe create their own pack or join a new one. Some, however, stay with the pack.

Grey wolves and white wolves are probably the most famous types of Wolf puppies known to humans.

Grey wolf pups grow up to be accomplished of hunting large animals like deer. They are strong and powerful and use their howling for communication with the other members of their pack. The howling of the wolves is so strong that it can actually be heard as far as 6 miles from where the wolf is. Both gray wolves and white wolves have excellent running capacities. They can operate at a speed of over 30 mph, and run is how they tire their prey and force it to slow down and then get hunted.

Some species of the white wolves can detect food even under the snow. They leap and jump towards their prey under the snow without even looking. Researchers have said that they do this by aligning themselves with the earth’s magnetic field. Wolves are an intelligent species and an important part of our wildlife. Their relationship with humans is also admirable as they help keep the cattle in line and are often assigned various other duties. 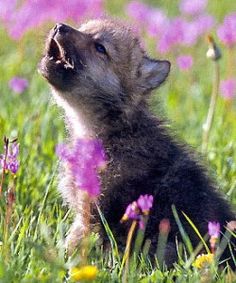 Some breeds of wolf hybrids and wolfdogs have been domesticated and can be adopted as puppies, it is crucial to take utmost care of these animals. They have to be trained by a professional trainer and given ample time to adjust around humans.

Their behavioral tendencies tend to be an issue sometimes, but they can be overcome by getting them properly trained. Also important is the availability of a spacious property for these pups to move about. They cannot get adjusted to constrained spaces. Wolf hybrid puppies turn out to be very active and enthusiastic pets.

Various names for your Baby Wolf :

If someone has decided to adopt a wolf hybrid pup as their pet, then it is necessary also to choose an appropriate name for their pet. There are several options for naming a wolf pup. Even the translation of the word wolf in various languages makes up for a good name option.

The wolves are extremely social. Since they live in packs, they take the roles assigned to them very seriously. The female wolves of the pack produce milk even if they are not the ones who have given birth for the baby wolf of the pack. The male wolves, on the other hand, fight with their contemporaries to be able to babysit the young ones. In fact, in some cases, where a baby pup has not survived and has died, the pack was found actually to bury it and mourn for it just like humans do.

What do you think of these cute baby wolf puppies?
Comment Below!