Here’s all the information about Flying Squirrel as pets you need right from its core description, adoption, care , habitat and so on.

What is a Flying Squirrel?

What would you have if you mated a squirrel and a bird? A Flying Squirrel!

Flying Squirrels are scientifically known as Pteromyini or Petauristini and they are a tribe of 44 different species of squirrels in the family Sciuridae. However, of 44 species only two are found in North America.

There are 2 types of Flying Squirrel:

They are generally differentiated with respect to their Height! Their overall color is both gray and or brown.

Flying squirrels are found in deciduous and coniferous forests as well as woodlands. They make their homes in woodpecker holes, snags, nest boxes, abandoned nests of birds and other squirrels. In the winter season, multiple squirrels may nest together to keep warm.

ts but glide from one tree to another with the help of a furry, parachute-like membrane that stretches from wrist to ankle called as Patagium.

Their long tails give stability in flight and also act as brakes. The anatomic difference between regular squirrels and flying squirrels is that they have long limb bones and hand and short foot bones and distal vertebrae. Their legs and tail help them while flying by allowing them to steer and exercise control over their glide path.

They fly as high as 90 meters (295 ft.). Studies suggest these creatures that have originated 18-20 million years ago are nocturnal and omnivorous and feast on different fruits, buds, flowers, seeds insects, spiders, gastropods, fungi, tree sap and bird’s eggs.

Flying squirrels in the wild live up to about six years but can also age up to fifteen years in zoos.

Predators and diseases are the reason behind the high the mortality rate in young flying squirrels. Tree snakes, raccoons, fishers, owls, martens, feral cats and bobcats are common predators of Flying Squirrels.

Flying squirrels mate once or twice a year February to March.

When the babies are born, the female squirrels live with them in maternal nest sites and protect them until they leave the nest.

Male flying squirrels do not participate in nurturing their offspring hence it is the mothers’ responsibility to raise them and nurture them. Infant flying squirrels are hairless, apart from their whiskers.

Flying Squirrels like Sugar Gliders, bond with their owners. As humans, it is easier to win their love when they are young. It’s easier to bond with a baby flying squirrel that is about 6 -8 weeks old making it the optimum age to adopt.

Please BEWARE- Sellers can sometimes lie about the age.

Hence, cross check your sources to avoid being conned. Be sure to buy these cuties from breeders with a USDA license. Some say Flying Squirrels get lonely and depressed if purchased alone, but that is not true. Purchasing a pair of them is certainly more advisable.

Well, even we humans are happy if we’re with our friend eh?

The price of a flying squirrel depends on the breeder and thus cannot be specified. However, baby flying squirrels are costlier than older ones as the younger ones are easy to train and bond with.

Flying Squirrels have special cages that are available online.

They are very active creatures, and it’s important that they exercise to ward off obesity and other forms of sickness. Therefore, a few toys for them to play with would be great. 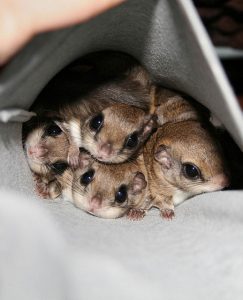 You can place a nonpoisonous tree branch for them to glide and play around.

One of the most frequently asked question is that is it safe to let a flying squirrel roam freely around the house? The answer is no.

Because of their small size and overactive nature, it is very easy to lose them, and also they are chances that they may hurt or drown themselves if the bathroom doors are open.

To bond with a baby flying squirrel, you need to spend minimum 3 hours with them for three weeks after adoption.

It is advised that you introduce them to others in your house as well and let them take the squirrels out of the cage and handle them once in a while so your flying buddy can be familiar with their scents and voice as well. Also, it is vital that you hand feed them in the initial weeks.

When your darling gets older while you’re inside your house, you may remove it out of its cage and play, but please do not take them outside unless they are in their containers as they may climb a tree and never come down.

Flying squirrels in captivity are prone to calcium deficiency.

Some people use Repcal, a calcium powder, but you can feed adults orange slices twice per week as an organic solution.

People often get confused between Sugar Gliders and Flying Squirrels.

Sugar Gliders are marsupials and flyers are rodents. Sugar Gliders get along with another pets in the house but flying squirrels don’t. Gliders breed easily in captivity whereas Flyers don’t.

Also, Sugar Gliders have scent glands that are absent in flying squirrels.

The only things common between them is that they glide, are the same size and form deep bonds with their owners.

Flying Squirrels aren’t susceptible to many illnesses. And if they do fall sick, any vet who has experience of working with small creatures can deal with the ailment. However, before adopting, do make sure you visit and ensure that the doctor is, in fact, capable of dealing with a crisis. 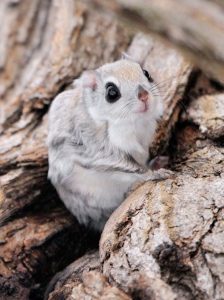 Most of their senses present are absent, and their internal organs are visible through the skin as their skin is translucent, and hence their sex can be signified. After five weeks, they are almost entirely developed and can respond to their environment.

They also start to develop a mind of their own.

Later on, they learn and practice to leap and glide. It takes a Flying Squirrel two and a half months to develop fully and be independent.

In recent times, Flying Squirrels are considered as a valid option for people interested in owning exotic pets due to their ability to form a deep bond with their masters.

So this was all about Flying Squirrel as pets! If you have one, do comment below to let us know!

9 thoughts on “Things to Consider before adopting a Flying Squirrel As Pet!”