If you think you are cool-headed, the capybaras are here to challenge you. Capybaras are the world’s largest rodents. Apart from their scientific name, Hydrochoerus hydrochaeris, they have several synonyms.

A capybara is also known as a water hog, a large rodent, and nature’s ottoman. A group of capybaras is a herd.

Capybaras are herbivores. But, they are also picky eaters. They only feed on plants. Capybaras graze in the morning and the evening. Capybaras are coprophagous, they eat their own feces. This is to help them digest the bacteria in their gut.

It also helps capybaras to absorb the nutrients from the grass and plants they consume. 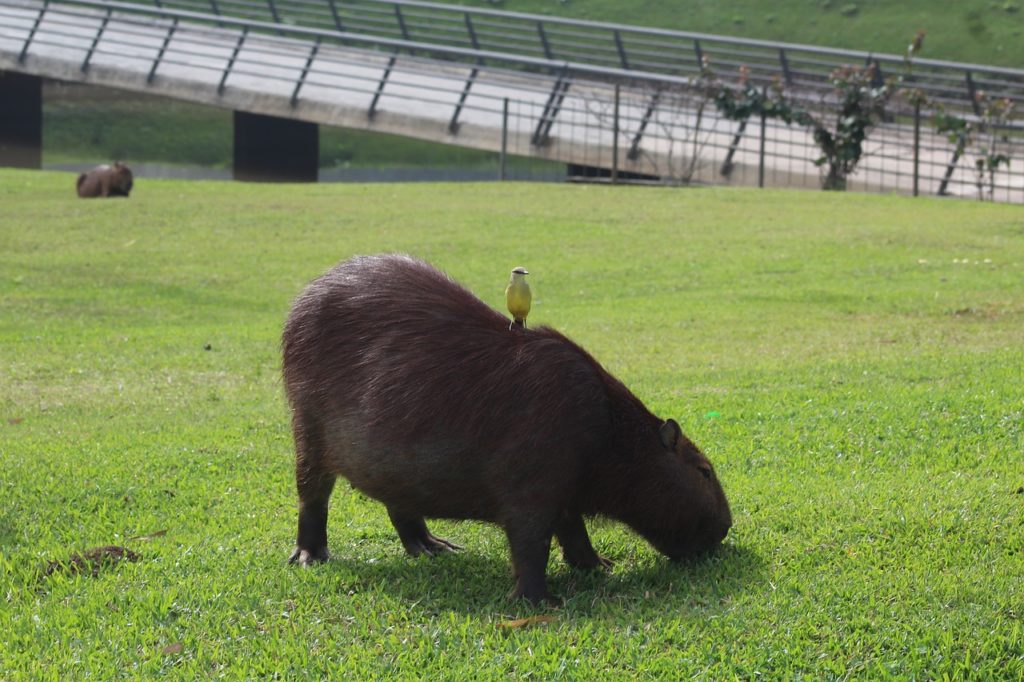 It also aids capybaras in absorbing the cellulose from the grass. Capybaras eat grass only during the winter season. Capybaras are excellent grazers.

Capybaras can be identified from their size and coat. Capybaras are 4 feet tall. Water hogs have a dark reddish-brown to dark brown hair. Capybaras do not have tails.

The world’s largest rodent can weigh as much as an adult human. The average weight of capybaras ranges from 25 to 79 kgs. A male capybara is identifiable via its scent gland on top of the snout.

Capybaras are vocal rodents. They communicate via growls and alarm barks. A herd is a large group, it consists of up to 50 capybaras and doubles the number in winter.

One dominant male capybara leads the herd. On land, Capybaras can run as fast as a horse. When capybaras feel threatened they tend to stay up all night. Dawn and dusk are their most active parts of a capybara’s day. Capybaras swim with their eyes, ears, and nose above the water.

Capybaras mate in water. The gestation period spans across 5 months. 4 to 5 pups are given birth to at once. A pup weighs around 1 to 2lb when it is born. Capybaras are very social and gregarious animals.

The youngsters are left to fend for themselves once they mature. Male pups mature after 24 months. While the female pups mature faster, within 12 months of being born.

Capybaras are native to South America and parts of Central America. Capybaras are sighted in the rainforests as well as near water bodies. These water hogs are semi-aquatic animals. Capybaras have webbed feet.

This aids them when they are exploring a water body. Grass and aquatic plants in large quantities are what capybaras consume. To escape the heat, they relax in the water bodies.

Several capybaras are also spotted in Japan. With the upcoming summer Olympics, zookeepers at the Izu Shaboten Koen are keen on the capybaras been the main tourist attraction.

They stay in pens and are fed fruits and leaves. Visitors at the zoo can feed and pet the capybaras at the zoo in Japan!

Capybara as a pet:

Have you ever wanted an exotic pet? But you cannot decide, which exotic animal deserves all your attention. Give me a chance to enlighten you about the world’s largest rodents, the capybaras.

Capybaras are not legal to own all across the globe, so you will have to check with the local legislations firsthand.

Since capybaras have a semiaquatic lifestyle, you need to have a waterbody in or near your house. They are called the world’s largest rodents because they are big animals. Capybaras will take up quite a bit of space.

However, Capybaras life up to 15 years when captive. A single capybara cannot be your pet. They are social animals, and housing a pair is often advisable. But, there might be temperament issues between the sexes. Like reptiles, capybaras will also need sunlight from UVB lamps.

Want to browse other exotic pets? Read this: Kinkajaou as pets.

Capybaras – the world’s largest rodents are not in danger of extinction. But, they continue to live in constant threat from their predators. They are jaguars, anacondas and other animals. Capybaras are also poached, their fatty skin is used in pharmaceuticals.