Think of an Agouti rodent. I mean imagine! But a rodent, with shiny sometimes stinky fur. Along with very small ears. And a big rump. Are you still with me? So that is what an agouti looks like!

Now, to check if your imagination matched the description, here’s an image:

Were you close or were you on point?

Agoutis are native to South America. They are tropical mammals. Rainforests are their primary habitats. One can see agoutis near water bodies. The agouti species have several different colors too! Agoutis range between brown to black with a different color for their underside! White, Yellow and grey are the different shades for an agouti’s front body.

Agoutis also have a short and hairless tail that is about 60cm long. The tail does not serve any specific purpose as such. The scientific name of an Agouti is Dasyprocta. An agouti weighs about 4 kgs. There are around 11 different Dasyprocta species!

Agoutis like other animals are preys for several big animals. Indigenous tribes hunt Agoutis for their meat. Agoutis are territorial. They mark their territory by urinating on them. Have you heard of Bret Lee? Or watched Karate kid? To escape their predators, agoutis jump up high. That is not all. Agoutis then spin mid-air! This stunt helps them evade their predators.

Many a time, agoutis will raise the hair on their rump in case of danger. This helps the agouti looks larger. When attacked, the predator ends up with a mouth full of hair. The agouti then escapes in case it is lucky. Deforestation is also a threat to this species. Agoutis are also known as super swimmers. They are fast and swim to save their life. In case of danger, agoutis jump right into the water and swim. Maybe all they are thinking about is Just keep swimming. Just keep swimming. Finding Nemo, anyone?

Agoutis are hoarders. They are omnivores animals. Agoutis feed on fruits and nuts. Sometimes, Agoutis bury nuts into the ground around their den. This is how agoutis store food. Talk about future planning!! Agoutis have very sharp teeth. Their teeth are strong enough to crack Brazilian nuts. Agoutis sit upright and munch on their food. Fallen fruits are something they love. Their tiny ears are so sharp, that an agouti can hear when the fruit hits the ground. Agoutis eat like squirrels. They sit on their hind legs and hold their food with the front paws. Agoutis have 3 toes on the hind legs and five in the front.

They say, that people who garden have green thumbs. Well, agoutis do too! These small gardeners, bury nuts under the ground for storage. Many times, they do not dig it back up. This, in turn, leads to a new tree growing. More oxygen, lesser global warming. Aren’t agoutis the smartest gardeners? This behavior is scatter-hoard behavior. But, when they do look for their buried treasure, they sniff it out. Agoutis have a sharp sense of smell.

Keeping an agouti as a pet is not common. In captivity, agoutis can live up to 20 years. Agoutis are not legal in all the states though. Checking that should be the first thing on your checklist! Agoutis are monogamous rodents. They are also solitary in nature. Keeping two agoutis of the same species, might not be a smart idea.

Agoutis are nature’s gardeners. They enjoy caching food and then searching for it. These rodents might also need a lot of space to roam around. Researching the type of cage, care, and veterinary needs beforehand are crucial. Agoutis as pets is a long term commitment. Think it through.

The eleven different agouti species are as follows:

Amongst the 11 species above, the Coiban and Ruatan Island agoutis are in danger. Their habitat is being taken away. These agoutis fall prey to hunters. All Agouti species are similar in appearance.

The main point of differentiation is their fur color and its distribution. Brazilian agoutis are the most widespread agoutis. They have a dark brownish forebody that is orange or reddish in the rear. Hence, it is also known as the Orange-rumped agouti.

1. Agoutis are monogamous. Yes, faithful lovers. Once hitched, they share a territory. But, agoutis do not sleep and forage together.

3. The litter size is between 1 to 4 baby agoutis. One hour into the world and agoutis can walk and run!

5. These rodents are the only mammals known to be able to break open a Brazilian nut all by themselves. 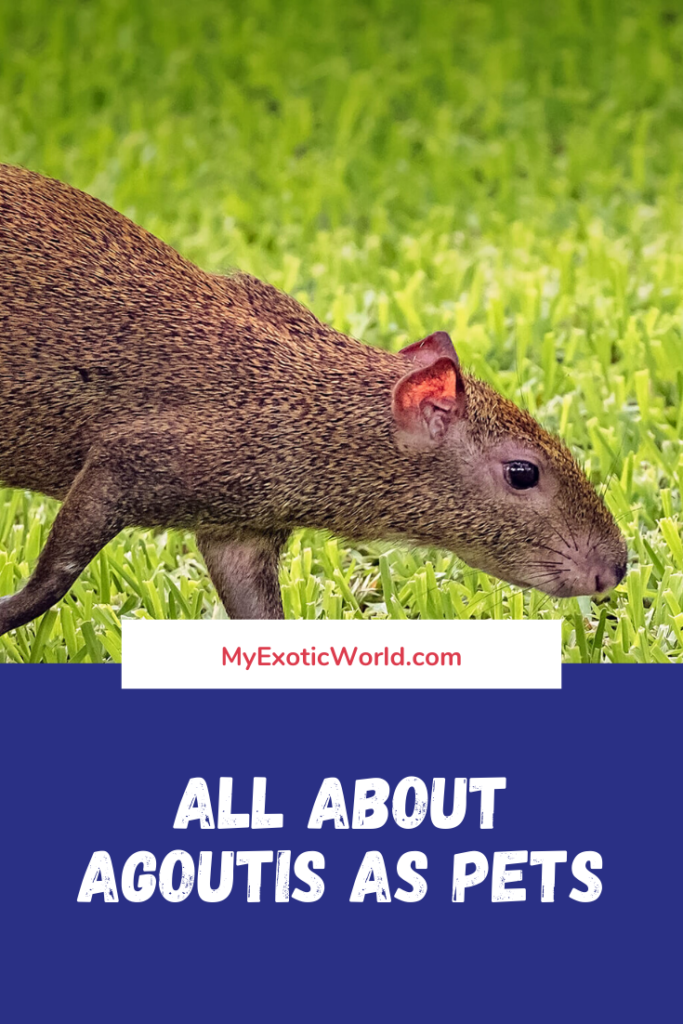 6. We humans have to buy raincoats, to shield us from the rain. Agoutis but, have hairs that have an oily sheen. This makes them waterproof and also a little shine.

7. An agouti does not use its whole feet to move from one place to another. It tiptoes, gallops and jumps instead.

8. Agoutis have several alternate- rather native names. In Ecuador, they are guatusas. In Mexico, serques. And, in Panama, they call them ñeque.

9. Guinea pigs are their cousins. Pacas and Acouchis are close relatives too!

10. Agoutis do not have seasons for breeding. They are slow breeders and breed once a year.

So this was all about Agouti Rodent as pets, their diet, facts and as predators!

Is Hyrax a Pokemon? What makes this an exotic pet? Read on..