Hyacinth Macaw as Pet – All you need to know!

Thinking about Hyacinth Macaw as a pet? 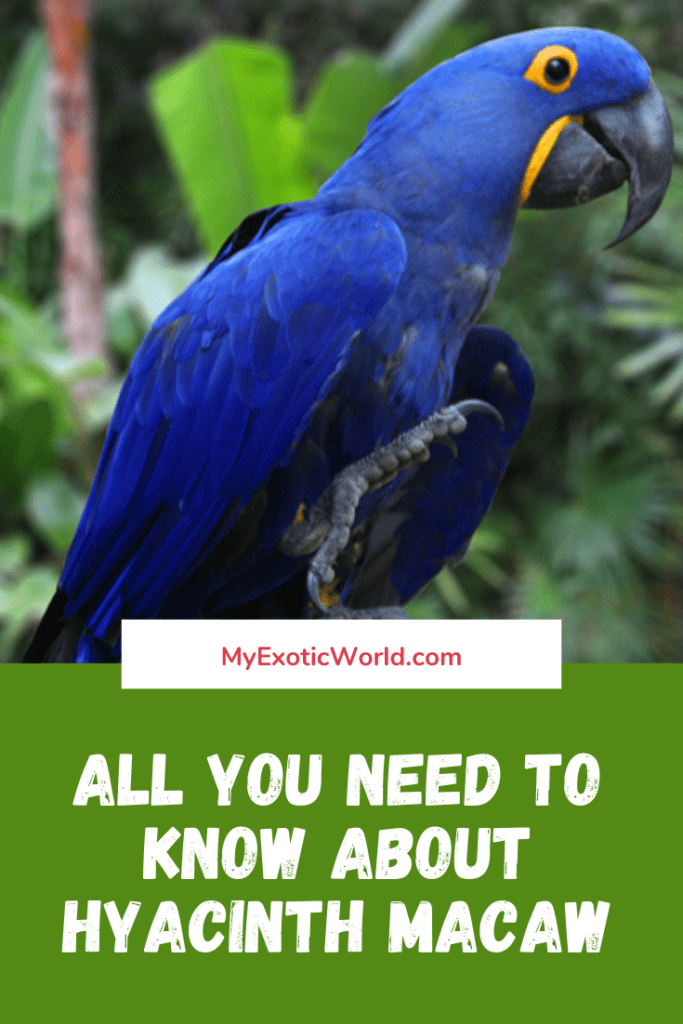 It is fairly normal for you to feel the need in order to have a pet in your life when you have the need of a companion or in need of a friendly presence welcoming you back when you reach back home from having a hard day at office or college.

Birds as pets are very good choices for individuals who are first-time parents of kind of pet as they are easy to be maintained as well as looked after and often require only less amount of space in order for them to get accommodated.

If you have ever thought about getting parrots as pets, Hyacinth Macaw would be a prevalent option which will leave you in awe through their intelligent characteristics and mannerisms which keep them apart from others who belong to the same family of species and would make them more preferable while opting as a pet.

Before purchasing any pet, it is crucial that you do a basic study about the facts associated with them such as:

As the bird is widely recognized as the largest in the parrot family, the cost of acquiring it also is relatively high and is represented to be around $10,000 approximately.

According to the size and the location found, the prices of the Hyacinth Macaw can vary to a low $8000 and at the highest, it is reported to be sold at $12,000 and more. In order to purchase a cage for the bird, you would need to keep apart about $1000-$1500 on average for good quality and about $200 for the travel cases which can be used.

The food and other expenses of the bird per month would come to an amount of $40-60.

The main ingredients which are to be included in a Hyacinth Macaw’s diet are brazil nuts which can be found in native palms as the birds consume the nuts with the help of their strong beaks.

Most of the birds often also resort to search for the acuri nut type which is already predigested by the cattle and can be easily found in the dung of the cattle.

Fruits and vegetables are also included in the dietary list of the birds and they often tend to travel long distances in search of the ripest of the food available.

Most of the Hyacinth Macaw bird population can be found to exist relatively in three major areas in South America namely:

The bird species prefer palm swamps, woodlands and other wooded habitats wherein they can avoid dense, humid forests and enjoy the atmosphere of open areas.

In order to make sure that your Hyacinth Macaw will have the best accommodation experience, you should relatively purchase a cage which will occasionally defer according to the size of the appropriate species but should be at least more than 4 foot long and 5 foot high.

The bigger the cage size is, the bird will get the opportunity to stretch out its wings without having any sort of muscle atrophy concerns.

The bars in the cage should be thick and of good quality so as to withstand the powerful beaks of the bird and also you should make sure to re-arrange your furniture accordingly with respect to the age to be kept.

The nesting process of Hyacinth Macaw happens usually between July and December where the incubation period lasts for a month in the cavities or nests constructed, commonly found in manduvi tree. The eggs are kept in a cluster of two where the second egg hatches later that the first and has very low chances of survival due to competition for food and hence the birds in advance, lays more eggs in order to equalize the number in total.

The chicks are often found in the nest about 110 days after hatching and keep on clinging on to their parents for about 6 months after their birth and afterward are found to be growing apart being mature and breeding at about 7 years of age.

Although several factors like competition and survival come into play the Hyacinth Macaw’s lifespan is found to be longer in captivity than when compared to, it is free in wildlife.

This gives the impression that if properly taken care of and maintained by good quality methods and mechanisms the birds would hang around on average for about 25-60 years.

The lifespan years can collectively differ also according to the specific type of bird family that you are trying to purchase.

In the International Union for Conservation of Nature’s Red List, the Hyacinth Macaw species is under the category of Vulnerable due to its decrease in number while compared to earlier years.

This is mainly due to cage bird trade wherein birds are taken from the wild and into the market and also another reason being the habitat getting altered in order to accommodate more industrial ranches thereby giving them fewer chances of survival.

The bird members of the Hyacinth Macaw family are keenly kept in the watch by the law in Brazil and Bolivia where the commercial export of the birds is being banned in order to protect them.

Various projects such as the Hyacinth Macaw Project in the Brazilian state of Mato Grosso do Sul is being run in order to create more artificial cages for the birds to compensate for the lesser amount of sites available for them.

The conservation of the Hyacinth Macaw birds is also the primary concern of organizations such as Minnesota Zoo with BioBrazil and the World Wildlife Fund.

The species of this category are often referred to as “gentle giants” which portrait the Hyacinth Macaw as intelligent creatures who are loud at times and with proper arrangement of space can be found to be calm and contained rather than being aggressive. The birds also can be trained to talk to a limited extent and often enjoy the company of large housing with numerous toys and pieces of equipment to chew on, with respect to their overgrown beaks.

In order to be able to have Hyacinth Macaw as your pet, it is crucial that you put in enough time and commitment into even the minute details that are involved in the process.

You should also keep in mind to shower them with daily attention and adequate interaction as without them, there are high chances of these social birds resorting to self-mutilation and even destruction activities.